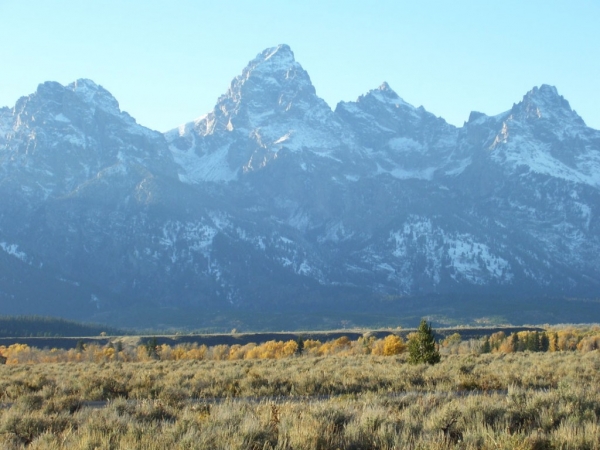 The glaciers in Glacier National Park are melting.

Blueberry bushes in Acadia National Park are flowering weeks earlier than they did more than 100 years ago.

These are just some of the ways that climate change is threatening the national parks.

There are more than 400 landmarks that are managed by theNational Park Service, like the Everglades in Florida and the Statue of Liberty and Ellis Island in New York. National parks receive more than 275 million visitors every year.

To commemorate the Park Service’s centennial, the film company MacGillivray Freeman released National Parks Adventure, a documentary highlighting more than 30 national parks—from the dramatic rock formations of Arches in Utah to the snow-capped mountains of the Grand Tetons in Wyoming.

National Parks Adventure director Greg MacGillivray visited Chicago Feb. 26 for a screening of his film at the Museum of Science and Industry, where he chatted with more than 100 Chicago-area fourth through sixth graders about what it was like to make the film.

“I love the fact that we can all go to these places any time we want,” MacGillivray said. “[W]e all own these best places in our country. That is so fair and democratic. I adore it.”

But these delicate and beautiful ecosystems are increasingly endangered.

Warming temperatures and changing weather patterns are altering the migration patterns of animals; increasing the severity, frequency and size of wildfires; and making it easier for non-native plant and animal species to invade, according to the National Park Service. National parks could look very different after another 100 years.

“We know for sure that our snowpack is decreasing,” said Ann Rodman, acting branch chief for physical sciences at Yellowstone National Park.

Snowpack is the accumulation of snowfall. Despite variability from year to year, Yellowstone’s snowpack has been steadily decreasing for the past few decades as a result of warming temperatures, Rodman said.

In Yellowstone and many other western national parks, the snowpack stores much of the region’s water, which melts and flows into rivers in springtime. It is an important part of the ecosystem.

“[It’s] going to be a huge change if there’s less snow stored in these big areas,” Rodman said.

“Lake level is a question mark for all the Great Lakes parks and shorelines,” said Kim Swift, education program manager at Indiana Dunes. She said any change in lake level could have a serious impact on these coastal parks.

The Apostle Islands got a preview of these possibly dramatic consequences when Lake Superior was two feet below its average level from 2007 to 2008.

“Our docks were way high out of the water,” said Bob Krumenaker, superintendent of Apostle Islands National Lakeshore. “We saw this as a window to what our future might look like.”

Since then, Lake Superior has seen less dramatic change, but Krumenaker said he has begun making adjustments to the park to accommodate potential lake level changes, including spending at least $1 million to change the height of the lakeshore docks based on climate scientists’ projections of lake levels.

Apostle Islands National Lakeshore also faces challenges in the winter season. The ice on Lake Superior is not lasting as long as in previous years and the number of days that ice covers the lake continues to decline.

Data collected over a period of more than 150 years from Lake Superior between the town of Bayfield, Wisconsin and Madeline Island show the length of time that ice cover made the waterway impassable for ships.

The data show a steady decline of ice duration at an average rate of 3.4 days per decade since 1857. But since 1975, the average rate of decline has accelerated to 14.7 days per decade—more than quadruple the previous rate, said Forrest Howk, lead author of a 2009 paper in the Journal of Great Lakes Research.

This year, the ferry between Bayfield and Madeline Island has been able to run continuously, meaning that the 2016 record will show zero days of ice duration, said Krumenaker.

Apostle Islands National Lakeshore is known for its ice caves–rocky hollows along the coast of Lake Superior. Park visitors can access these caves by walking on the frozen surface of the lake, but only if the Park Service determines the ice is stable enough.

The ice caves were only accessible for nine days in 2015, though Krumenaker said this isn’t strictly due to climate change. He said although the frequency of stable ice is declining, the park is also very cautious about allowing people to walk on the frozen lake.

“It takes a lot of things … even in the absence of climate change for the Park Service to feel like we can open the access route,” Krumenaker said.

So how will these changing park ecosystems affect wildlife in the national parks?

“The blueberries in the area now flower more than three weeks earlier than they did 160 years ago or so,” said John Kelly, management assistant at Acadia.

Kelly said that Maine, a state known for its blueberries, has long kept track of the fruit’s growing season for commercial reasons, but it wasn’t until recently that the data became relevant from a climate change perspective.

In Yellowstone National Park, the terrain is varied and provides different kinds of habitats for animal and plant species. According to Rodman, the north face of a mountain in Yellowstone is a much different habitat than the south face.

“We have [the] potential to hold on to a lot of different climates,” Rodman said.

Yellowstone species could relocate in the park or move to a higher elevation to find their preferred environmental conditions, according to Rodman. But this could also cause species to become increasingly isolated.

For example, the white bark pine tree thrives in high elevation alpine areas and is essential to those areas’ ecosystems. But these areas are more sensitive to changes in climate, Rodman said.

“[High alpine areas] don’t have as much variability in temperature and moisture changes—they’ve evolved to narrower regions,” Rodman said. “We expect those places to be more sensitive to a lot of the changes that are going to happen.”

If temperatures increase and moisture availability changes, trees that prefer high alpine environments, like the white bark pine, could become restricted to smaller and smaller areas.

The Apostle Islands, too, may start to see a shift in wildlife as the lakeshore’s climate warms.

By nature, islands are isolated and vulnerable ecosystems, and the Apostle Islands are no exception. Even under the best of circumstances, without climate change, there are fewer species on the islands than on the mainland, Krumenaker said.

With climate change, boreal forests, or forests made of primarily cone-bearing, needle-leaved or scale-leaved evergreen trees and usually found at lower latitudes are projected to shift north. This means that oak hickory forests traditionally found at a lower latitude could be the dominant forest in the Apostle Islands in 100 years, according to Krumenaker.

The Apostle Islands are a major source of revenue for their geographic area. In 2014, the islands had a $54 million impact as a result of national park tourism, $10 to $20 million of which came from visitors to the ice caves who spent money in the area, according to Krumenaker.

With the increasing variability of the climate, it will be difficult for lakeshore staff to predict whether the ice caves will be accessible and to predict the economic impact tourism or the lack thereof will have on the surrounding area.

“[Climate change] also has an impact on people and how they use parks and how they perceive parks,” Krumenaker said.

So what’s next for the national parks in their battle with climate change?

According to Kelly, a political shift could change the policies and funding related to climate change, which would affect the parks’ conservation and adaptation efforts.

Krumenaker said he hopes to continue to educate people about climate change so they understand it is not something that’s exclusive to far-away places.

“The places you care about close to home are affected by climate change, not just the Arctic and the Everglades,” Krumenaker said.