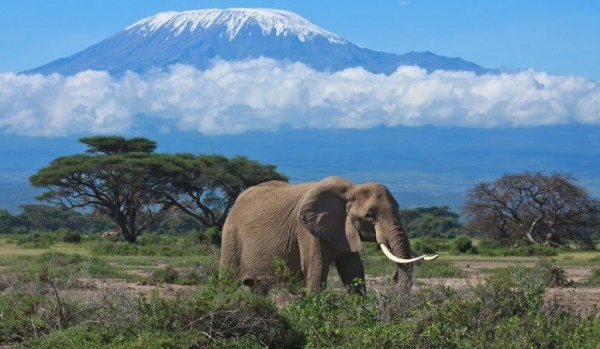 Reforesting Africa’s highest mountain could halt severe water shortages in Tanzania, according to a new report titled,  “2016 Sustainable Mountain Development in East Africa in a Changing Climate.” Mount (Mt.) Kilimanjaro, which is the highest mountain in Africa at 19,341 feet, has forests that are a source of water for the surrounding towns and the wider region. Water from the mountain feeds into one of the largest rivers, thePangani, which in turn provides food, fuel, and building materials to the rest of East Africa.

“Because there are now fewer trees to trap water from clouds, the annual amount of dew on Mt. Kilimanjaro in Tanzania is believed to have fallen by 25 percent. This drastic decline is equivalent to losing enough drinking water to supply 1 million people annually,” notes the report.

According to the executive director of the United Nations Environment Program,Erik Solheim, “Mt. Kilimanjaro is only one example of how climate change is severely damaging Africa’s majestic mountains and the people who depend on them. Across the continent, the damage done to these vital ecosystems is depriving people of the basic building blocks of life. As climate change intensifies, it is essential that governments act swiftly to prevent further harm.”

The report notes that there is a need for East African countries to create specific policies that target the impact of climate change on mountainous regions. In 2014, there were calls by these governments to act during the Arusha Mountain Forum, but nothing has been done since.

Apart from Mt. Kilimanjaro in Tanzania, East Africa is home to other mountains, such as Mt. Kenya, which is the second highest mountain in Africa; Mt. Elgon (Kenya-Uganda border); theRwenzori Mountains (Uganda); and the Virunga Mountains (Uganda-Rwanda-DRC border). These mountains feature major bodies of water, such as the Nile River, and are rich in biodiversity.

The United Nation’s Framework Convention on Climate Change (UNFCCC) defines climate change as the change in climate that is either caused directly or indirectly by human beings, thus altering the global atmosphere.

The Intergovernmental Panel on Climate Change  (IPCC) argues that greenhouse emissions caused by human activity, such as water vapor, carbon dioxide, and methane, cause global warming if they exceed the requisite atmospheric level of 2 degrees Celsius.

In Tanzania, higher temperatures from global warming has lead to increased forest wildfires. The “Sustainable Mountain Development in East Africa in a Changing Climate” report estimates that these fires have destroyed 13,000 hectares of forest since 1976.

The “Fourth Assessment Report” by the IPCC further predicts that East Africa will see an average increase in annual temperature of 3.2 degrees Celsius by 2080, which could reduce the glaciers atop East Africa’s mountains in the long term.

“Since the 1990s, the surface area of glaciers in the region has decreased by 80 percent. These glaciers are expected to vanish completely within a few decades as temperatures increase,” notes the report.

It is against this context that the IPCC argues for the reduction of greenhouse gas emissions by 40 to 70 percent by 2050.

Global warming has also resulted in reduced rainfall, floods, and water shortages, which in turn have led to crop failures, destruction of buildings, famine, forest fires, and severe droughts.

Kenya serves as a great case study for the effects of climate change. The Kenyan National Drought Management Authority recently  issued an early drought warning. Furthermore, theDevolution and Planning Cabinet Secretary says that 1.3 million Kenyans are in need of relief food, with arid and semi-arid lands being most affected by water shortages and malnutrition.

On the foot of Mt. Kilimanjaro in Tanzania is the town of Moshi, which is currently experiencing a water shortage due to local rivers drying up. The farmland in the town is also facing drought due to a dramatic drop in rainfall.

It further explains that countries in East Africa, such as Rwanda, can adopt measures to  increase food security and environmental conservation. The report advises Burundi to focus on  raising awareness about mountain policies and document its best practices of landscape and soil conservation.

According to the report, there is a need for East Africa to counter climate change effects through early warning systems, climate adaptation, and reforestation.

For instance, according to the United Nations Officer for Disaster Reduction’s Climate Risk and Early Warning Systems initiative, early warning systems have helped other countries to avert or reduce the effects of climate change.

This means investing in climate and water information services that can potentially save developing countries from economic losses. The Global Information and Early Warning System(GIEWS) supports national and regional initiatives for climate change, such as early warning systems.

Adaptation is also another way of countering climate change effects. The UNFCCC refers to adaptation as the advance preparation taken to counter climate change in the future. Adaptation measures include harvesting water, practicing forestry that is less resistant to fires, and developing drought tolerant crops.

Reforestation is another way to mitigate climate change. The IPCC notes that the cutting down of trees contributes to dramatic changes in climate, as the cut trees release the carbon previously retained in the wood. Between 2000 and 2005, there was a gross deforestation of 12.9 million hectares per year with the hardest hit continents being Africa, Southeast Asia, and South America. This number is alarming considering that forests account for a third of the world’s total mass.

Replanting  trees to compensate for those that have been cut down can make a positive difference if enforced through regulatory measures, a practice which has proven successful in China, the Philippines, and Thailand.

The “Sustainable Mountain Development in East Africa in a Changing Climate” report notes that there are several economic benefits to curbing climate change effects in East Africa.

“The mountains of East Africa are not only highly productive agricultural areas, the rivers they feed also have significant but largely unexploited, hydropower potential for a region largely crippled by a lack of electricity. Rivers in the Nile Basin could, for example, generate 20 gigawatts of electricity while the Mau Forest could generate a further 508 megawatts, enough to meet half of Kenya’s capacity.”

In addition, the East African tourism sector could also benefit if mountains are protected from the harmful effects of climate change.

“The tourism industry in the region is worth $7 billion. Mt. Kilimanjaro, for example, contributes over one third of Tanzania’s total revenue from tourism,” according to the Sustainable Mountain Development in East Africa in a Changing Climate report.

The report also notes that East Africa’s mountains contribute to climate change mitigation. In particular, Mt. Elgon has a rehabilitated forest in Kibale National Park, which sequesters carbon for a 99-year period. Sequestration is either a natural or artificial process in which carbon dioxide is removed from the atmosphere and held in either liquid or solid form.