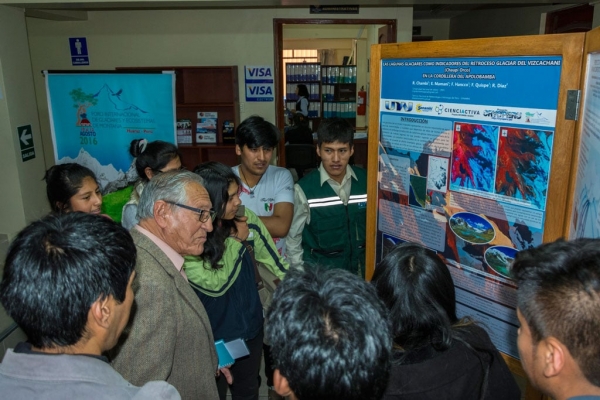 A faculty member and students from a provincial university in Peru recently presented the results of a class project on glacier research at an international conference. Their study of glacier retreat and environmental risks draws on the familiarity of the faculty and students with local environments and cultures. It sets an important example by showing how this familiarity makes such work possible in what might be seen as an unfavorable setting: a small university in a developing country.

This post was originally posted on the GlacierHub.org by Ben Orlove.

enny Aguilar Diaz, the faculty member, teaches environmental engineering at the National University of Juliaca, located in the Puno region in southern Peru. He also works with SENAMHI, the Peruvian National Meteorological and Hydrological Service.

Speaking with GlacierHub last month, and following up with an email interview, Diaz explained that the project focused on  Mount Vizcachani, a peak 6044 meters above sea level in the Cordillera Apolobamba, located on the border between Peru and Bolivia.  He expressed his appreciation for SENAMHI, which provided data and logistical support to the project. He noted as well that the university, founded in 2007, is smaller and less well funded than older universities in Peru.

The students used two different methods to study the peak, its glaciers and the associated lakes and streams. They examined LANDSAT satellite images from 1985 to 2016 to identify recently formed glacier lakes. This project gave students experience in using the Normalized Difference Snow Index (NDSI) to analyze these images and detect changes in glacier cover and new lakes. The research also included field trips to the glaciers to provide ground-truthing of the satellite images and to assess water quality.

The field work involved significant challenges: a five-hour drive on unpaved roads in poor condition, and then another five hours of hiking to the glacier. The hiking provided an opportunity for the students to converse with the members of the local community of Pampamachay, whose livelihoods rest on the cultivation of cold-tolerant potato varieties and on the herding of sheep and alpacas.

Several of the students, who are from the Puno region, speak Quechua, the primary language of the community.  The local residents explained their concerns, particularly about the expansion of artisanal gold mining in the higher sections of the Cordillera, which could lead to water pollution. To assess water quality, the students analyzed the water samples which they collected in the lakes, and found that it was mildly acid, with an average pH of 6.5.

The students later shared this information with the communities, who expressed a fear about possible impacts on pasture and on alpaca herds. Fortunately, this level does not seem threatening, though there is a possibility of increased acidification from the weathering of rocks that are newly exposed by glacier retreat. Diaz wrote to GlacierHub, “the meeting with the community unfolded in a friendly manner.” He mentioned a positive note of the contacts with the community members: the sighting of eight Andean condors.  This species is the largest flying bird in the world, of importance throughout Peru. It appears in the country’s first coat of arms and in indigenous rituals.

Diaz, along with another faculty member from the National University of Juliaca, Ricardo Chambi and three students, presented a poster at the International Forum on Glaciers and Mountain Ecosystems, held in Huaraz, Peru in August. The poster, titled “Glacier Lakes as Indicators of Glacier Retreat in Vizcachani, Cordillera Apolobamba” indicated that the glacier cover in the Cordillera Apolobamba has decreased by 57% between 1985 and 2016. There had been only one lake at the start of this period, Japucocha, but by the end there were five, two of them covering 10 hectares in area. These other lakes are so new that they do not yet have names, but only have been given numbers.

The researchers reported that there is a significant risk of glacier lake outburst floods. They commented on the instability of the moraines behind which the lakes have formed, and showed an image of one of the new lakes, into which a glacier had recently released ice through a calving event. They comment that the community of Pampamachay lies in the path of these possible flood events, another finding of potential importance to the community.

A number of participants in the forum listened to the explanations which Diaz and the students gave of the poster. Benjamin Morales, the director of INAIGEM, the institution which sponsored the forum, asked several questions after their explanation.  One of the student authors, Franklin Hancco, explained to GlacierHub that this forum was the first conference that he attended outside his home region of Puno. He indicated that it was an exciting opportunity for him to meet researchers from other parts of Peru and Latin America, as well as from Europe and North America.

The poster demonstrates the potential for training students in scientific research methods, even in small provincial universities that lack the support of wealthier institutions located in the capital city of Lima. Such methods can serve to document processes of glacier change. The poster shows as well the value of linkages between glacier researchers and mountain communities, and the importance of language and culture in establishing these linkages.