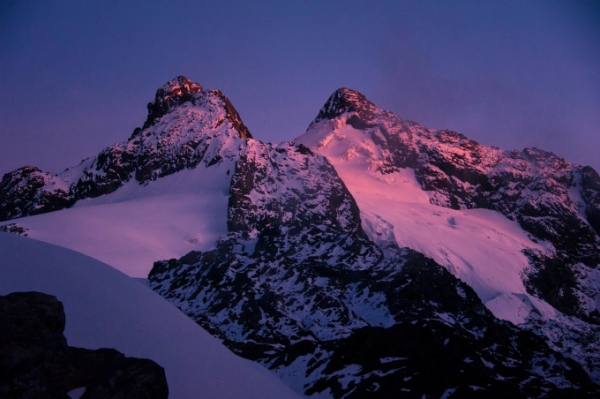 As mountain professionals, our guide and athlete team has witnessed first-hand the impact of global climate change. So as the news about the Paris COP21 agreement filtered out last month, we asked UN Mountain Partnership Ambassador Jake Norton to crystalize his thoughts on what it all meant for the mountains. All of the members of our guide and athlete team have personal stories about disappearing glaciers, but Norton has a rare talent for putting an alpine perspective into thoughtful words. In this powerful essay he explains why this issue matters to anyone who works, plays or lives for the mountains.

Two weeks ago, the world community convened in Paris for the COP21 climate talks. It was a meeting tainted by past failings and undermined by the senseless attacks just weeks prior; yet despite that, some impressive commitments were made: Together, global leaders agreed to keep long-term warming to 2°C, or 3.6°F, and to try to restrict it to 1.5°C (2.7°F). Additionally, wealthy countries agreed to raise $100 billion per year by 2020 to help poorer nations transform their economies to more climate- friendly models. And, thanks to the efforts of my colleagues at the UN’s Mountain Partnership and mountain lovers worldwide, we ensured that mountains, mountain environments, and mountain peoples and communities were included in the discussions and commitments of COP21.

As I celebrated the successes of COP21, my excitement was quickly checked by thoughts of the change already underway.

Three years ago, I watched water melting off the Gangotri Glacier in India. The drip seemed innocent enough: one single drop of water hanging off the edge of an icicle, falling down into the flowing stream below. But its innocence came into question as another quickly appeared to replace the first…and then another, and another, and another. The steady drip, drip, dripping of the water belied the ferocious splendor surrounding me: walls loomed above, thousands of feet high, fierce and impenetrable, sweeping towers of granite and ice, a fortress with little sign of weakness. This was the mountains, as pure and strong and powerful as any I could imagine.

But they were also weak, and becoming weaker. Fragile. These towers of might were being beaten down, but not by the steady pounding of eternity, not by the ancient, creeping forces of geology and tectonics. Rather, their frailty was a much speedier event, keeping time with the dripping of water pouring from melting glaciers. Their ongoing demise was one wrought by me: by my travels around the world, ensconced in the bowels of a jet plane; by my consumption of things–computers and cameras, fleeces and flip-flops and food; by my reluctant-but-still-full-fledged participation in the fossil fuel economy. Their accelerating demise was wrought by all of us on the glacier that day, and by all of us humans on the earth. We’re all part of the problem; some of us more than others, but we’re all in it together.

“For most of my life–about 30 years and counting–the mountains have been my sanctuary. I go to them for work and for play, but also for sanity. Amidst their flying buttresses and deep valleys I find a solace like nowhere else, grounded in the knowledge that I am a small part of a great machine, my actions and thoughts and ego–my existence or death–meaning little in the eternal life of the mountain realm.”

For most of my life–about 30 years and counting–the mountains have been my sanctuary. I go to them for work and for play, but also for sanity. Amidst their flying buttresses and deep valleys I find a solace like nowhere else, grounded in the knowledge that I am a small part of a great machine, my actions and thoughts and ego–my existence or death–meaning little in the eternal life of the mountain realm. Or does it? That dripping continued, pulsing to a different tune, shaking the bedrock of my mountain faith.

And it’s not just the high peaks and valleys, the glaciers and summits which are hurting. Among the hardest-hit realms from climate change are mountains–which include mountain ecosystems and communities. The high peaks of the world may be, at their zeniths, devoid of life and vibrance. But in their valleys and upon their shoulders live roughly one billion people, and one quarter of the globe’s flora and fauna. And as the world’s water towers, they provide some 70 percent of our fresh water; for many arid regions, their glaciers and semi-permanent snowpack are often the only source of water in the dry season.

But this is all in flux. Glaciers–like that one I was standing on–are melting fast. India’s Gangotri Glacier–which is the source of the Ganges River, lifeblood to 500 million souls downstream–is retreating up to 50 feet per year. Downstream of these mountains, already-marginalized communities– like the Tamang in Nepal, the Bakonjo in Uganda, the Quechua in Peru, or the Quinault in Washington State–are feeling the effects of climate change. Year by year, they are faced with more drought or worse flooding; farmland is damaged and crop yields reduced; an already-tough situation is getting increasingly worse.

And the same situation holds true for countless animals around the world. From the elusive and majestic snow leopard of the high Himalaya to the tiny-yet-critical Cascades frog of the Pacific Northwest, changing climate, melting glaciers, and transforming ecosystems are putting an increased strain on a great many mountain species.

But, unlike Vegas, what happens in the mountains does not stay in the mountains. As the plumber’s adage goes, um, feces flows downhill, and likewise the woes of the mountains will be–and already are–felt by those downstream. The Sierra Nevada Mountains of California may not be a place of interest to many farmers in the Central Valley, but their snowpack sure is; the record drought in 2015 has hammered farms and farming communities, whether the dry summits are visible or not. The Samburu people of Northern Kenya may never visit Mount Kenya or even see its peak towering on the distant horizon, but they feel its presence daily with the ebb and flow of the Ewaso N’giro River. It is the lifeblood of this desert region bordering Somalia, and it originates on the slopes of the mountain a hundred miles away…a mountain whose glaciers will soon be gone.

I’ve seen the snows melting on mountains I’ve climbed and visited around the globe. Kilimanjaro is nearly barren, and Kenya and the Rwenzori are not far behind. The main Naimona’nyi Feng (Gurla Mandhata) glacier of western Tibet–feeder of some of the biggest rivers in Asia–is changing at an alarming rate, retreating up to 191 meters (626 feet) in the last decade. The Broggi Glacier near Nevado Huascaran in Peru has disappeared completely, and across the Cordillera Blanca range, glaciers have shrunk by an average of 25 percent, with average temperatures increasing by 1.7°F. And across my home state of Colorado, pine beetles ravage the great stands of evergreens that are the backbone of the ecosystem. Warmer winter temperatures and earlier springs have allowed the species to double their reproduction to two cycles annually.

“Anyone who has spent time in the mountains knows they do not give up easily. As I watch the drips of water–from Kailash to Colorado–I see destruction, but also salvation….Yes, we humans are adept at destroying. But we’re also skilled at creating, at loving, at protecting.”

But all is not lost. Anyone who has spent time in the mountains knows they do not give up easily. As I watch the drips of water–from Kailash to Colorado–I see destruction, but also salvation. In a single drop is me…is you…is all of us. Within that single drop is the fuel we burn, the things we consume, the choices we make. Yes, we humans are adept at destroying. But we’re also skilled at creating, at loving, at protecting. The history of our species is rife with examples. We simply have to care enough to act, to make small sacrifices that might cause short-term discomfort, but in exchange for long-term enjoyment of the peaks and people and places we hold dear.

​As 2015 comes to a close and resolutions are on the threshold, let us all resolve to act for our mountains. Walk more, drive less. Turn the heat down and toss on that new Microtherm. Write a letter to your senator, urging him or her to take action…and then turn off the lights. And get out into the mountains: revel in their splendor and the gifts they provide, while also recognizing their frailty. I know I have a long way to go, and a lot of actions to take. I resolve to begin the process today. Together I know we can make the changes needed to meet the COP21 targets…and turn those drips back into icicles.