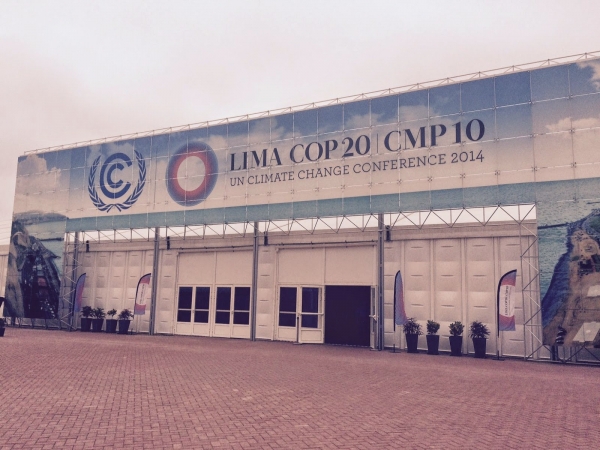 The sheer number of events and gatherings in Lima during COP20 both inside and outside the official venue was staggering. Compared to previous COPs, including COP16 in Cancun, Mexico, the number and quality of events focusing on Latin America was unprecedented and reflects the high level of activity on the issue in the region.

On 10 December, tens of thousands took to the streets of Lima for the Global March in Defence of Mother Earth. The march was Latin America’s largest climate march ever, drawing 15 000 people. Indigenous peoples, trade unionists, women’s groups, students, and global activists came together calling for action not just on climate change, but also for the protection of environmental activists in the region that have faced harassment and violence.

Over the course of 12 days, the ‘Voices for Climate’ space organised by the Peruvian government saw approximately 80 000 visitors pass through its doors. The space was dedicated to showcasing proposals and initiatives on climate change on the five main issues of Peru’s climate agenda: forests, mountains and water, oceans, energy and sustainable cities.

Behind the scenes, the Peruvian COP20 presidency team was actively engaging with civil society as it prepared to host the COP. This is perhaps unsurprising given COP20 President Manuel Pulgar-Vidal was the former head of one of Peru’s leading environmental organisations, Sociedad Peruana de Derecho Ambiental. Nonetheless, it is an important reflection of how non-state actors are engaging in high level with government, Brookings highlights. Some governments are in turn soliciting their input and support. During the COP the Mexican delegation invited civil society groups to a briefing session on the negotiations and Mexico’s participation. Attended by around 30 civil society representatives and the majority of Mexico’s delegation, the briefing was a useful exercise to encourage dialogue and transparency.

Despite some of these positive examples, there were also various stark reminders about the dangers and difficulties facing civil society groups and citizens working on climate change and environmental issues in general. During the COP20 some the wives of murdered indigenous leaders from Peru’s Amazon held a demonstration and press conference demanding justice and that the government do more to protect their lands. The Guardian had reported that the anti-logging campaigner Edwin Chota and three other Ashenika leaders were killed in Peru last September over territory they had been trying to secure for their community.

Meanwhile, authorities in Ecuador repeatedly stopped a group of activists on their way to the COP20, and eventually seized their bus. The activists from the Yasunidos group were on their way to Lima to protest against the decision to extract oil from reserves under Ecuador’s Yasuni National Park. According to the activists, they were stopped because Ecuador’s president, Rafael Correa, sought to avoid any potentially embarrassing incidences in Lima. Government officials in Ecuador say they stopped the bus due to the driver having the incorrect documentation. The irony of this situation was that this incident and another involving Ecuador’s decision to deny a request for German parliamentarians to visit the Yasuni national park dominated discussions surrounding Ecuadors’s participation at the COP.

At an event on Latin American and Caribbean think tanks, a small group of organisation discussed their views on the lead up to Paris 2015. What was surprising about this event according to Brookings was that only organisations specialised in environmental or climate issues were represented; not one of Peru’s mainstream think tanks working on national economic or development issues was there. The participation of think tanks in Latin America working on economic and development issues is crucial for the climate debate in the region, and this remains a particular challenge for 2015. These organisations have vital perspectives and ideas to contribute, especially on the political process and national debates on development. As the COP20 showed more generally, these think tanks from Latin America are still insufficiently involved with the climate process and debate. With the Intended Nationally Determined Contributions (INDC) process now underway and the Paris deadline fast approaching, these think tanks can play a significant role in developing new domestic narratives that combine climate and development objectives.