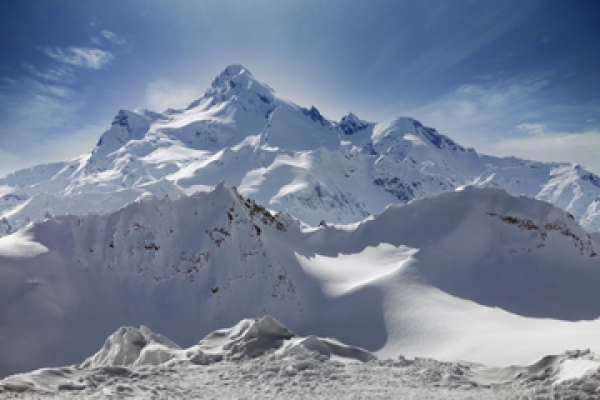 Mount Elbrus isn’t technically a mountain — it is an inactive volcano located in the western Caucasus mountain range, near the Georgian border in Kabardino-Balkaria and Karachay–Cherkessia, Russia.

With an elevation of 18,510 feet (5,642 meters), it is part of the Caucasus Range that straddles Asia and Europe, although most geographers place it in Europe. This makes it the tallest mountain in Europe and one of the Seven Summits, the highest mountains in each of the continents and elite climbers aspire to summit all of them.

Meaning of the name

"Mingi-Tau" is the name given Elbrus by the Balkars, the Turkic people of the Caucasus region. This translates to "resembling a thousand mountains," as a homage to the mountain’s size.

Before the Balkars, the mountain was known as Sobilus, which is Latin for "pine cone" This is a variation of strobilos, meaning "a twisted object," which is an apt description of the mountain's summit.

The mountain also has a mythological history. In Greek mythology. Zeus chained Prometheus to the mountain as punishment for stealing fire from Zeus and sharing it with mankind. The name also has Persian origins, a derivation of Harā Bərəzaitī, a mountain in Persian mythology.

The climate is most conducive to climbing in July and August, when the weather is at its most stable.

Even in the summer, nighttime temperatures average 18 F (minus 8 C). Temperatures above the snowline can fall as low as minus 22 F (minus 30 C) during the day during the winter.

While the mountain is inland, it is positioned between the Caspian Sea and the Black Sea. These two large bodies of water have an impact on wind and precipitation.

Elbrus has a unique cable car system, which was built on the south side of the mountain from 1959 to 1976. The cable car reaches 12,500 feet (3,658 m).  From there, most climbers take the Standard Route up the south side to the summit.

While the lack of crevasses can lull climbers into a false sense of safety, the Standard Route is challenging due to the snow, high winds and a high elevation. About 15 to 30 climbers die each year, which is a fairly high ratio of climbers to climber deaths when compared to other mountains.

Mount Elbrus has 22 glaciers that feed three rivers — Baksan, Malka and Kuban. The mountain is covered with snow year-round.

While it can be a dangerous climb, it is considered among the easiest of the Seven Summits. The typical climbing season is May to September. The harsh winter conditions keep all but the most experienced climbers off the mountain.

It takes most climbers less than a week to summit, which is short compared to the other Seven Summits.

Another high point in Europe

Mount Elbrus gets the title of highest in Europe. Another, perhaps better known, peak is Mont Blanc. It is the highest mountain in the Alps and the European Union. Its elevation is 15,781 feet (4,810 m) above sea level.

1829: Kabardinian Killar Khashirov, a guide for a Russian army scientific expedition, was the first to reach the east summit, which is the lower of the two summits.

1874: The higher west summit was ascended by Akhia Sottaiev, a Balkarian guide, who was working for a group that was led by Brit Florence Crauford Grove and included Englishmen Frederick Gardner and Horace Walker, and Swiss climber Peter Knubel.

1942: During World War II, German forces had occupied all the territories north of the Baksan Valley and were gradually taking the mountain valleys in the Western Caucasus. Eventually a German Alpine division commandeered Priut 11. They retreated by early1943 and by mid-February Elbrus was back under Soviet control.

1956: A group of 400 climbers ascended the mountain to commemorate the 400th anniversary of Kabardino-Balkaria, the regional Soviet Republic.

1991: The outhouse at the Pruitt Hut — before it burned down a few years later — was named the world’s worst outhouse by Outside Magazine. While it gets a lot of use from climbers who drink a lot of water and take altitude medication, it doesn’t smell because it is completely frozen.

1997: Russian adventurer Alexander Abramov led an expedition that drove a modified Land Rover to the summit, making it the highest mountain climbed by a vehicle.

1998: A group of climbers started a fire while cooking and burned down Priut 11.