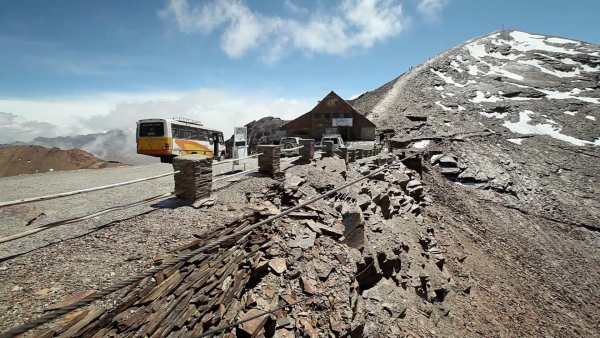 From 4-8 October 2015, researchers gathered to discuss and learn about the “Mountains of Our Future Earth.” This conference was held at the Centre for Mountain Studies (CMS) of the University of the Highlands and Islands in Perth, Scotland. It was organized by the CMS, together with the Mountain Research Initiative (MRI) and theGlobal Mountain Biodiversity Assessment (GMBA), all members of the Mountain Partnership.

As the organizers noted, mountain areas occupy 24% of the Earth’s land surface; they are home to 12% of the global population, and another 14% of the population live in their immediate proximity. Globally, mountain areas are vital sources of water for agricultural, industrial, and domestic use. In an urbanising world, mountain areas are key locations for tourism and recreation; some include major urban areas.

However, mountains are among the most disadvantaged regions in a global perspective: they are among the regions with the highest poverty rates, and among those most vulnerable. Vulnerabilities range from volcanic and seismic events and flooding to global climate change and the loss of vegetation and soils because of inappropriate agricultural and forestry practices and extractive industries. Mountain regions are thus key contexts for sustainable global development, which is also recognized in the new Sustainable Development Goals. The vital links between mountain and lowland systems are increasingly recognized in global and regional policy debates and action, and provide the context for the conference.

Glaciers will play a crucial role in climate related vulnerability in the coming decades, and several presentations at the Perth III Conference focused on the study of glaciers and their changes. Glaciers make global climate warming visible: they may serve as thermometers – in the form of ice cores that can be studied to track past climate – or as visible object of climate change: everybody can see the evident retreat of glaciers. Dirk Hoffmann demonstrated this through repeat photography of glaciers over decades as part of a transdisciplinary project of the Bolivian Mountain Institute (BMI).

Interestingly, glaciers in Bolivia showed relatively small changes since the end of the so-called Little Ice Age (ending in the 19th century) until the 1980s. Since then, there has been a rapid change. Where ski competitions on Chacaltaya glacier took place in the 1970s, the ice has gone today. Other glaciers in Bolivia show big retreat over the last years, too. With the expected El Niño event in 2015/16, the impact could even be devastating as less precipitation is expected during such events – the glaciers will lack their essential nourishment. For large parts of Bolivia, glaciers symbolize global warming and climate change.

Glacier data from Bolivia are in line with the global trend. As presented at the Perth III Conference, glacier decline in the first decade of the 21st century has reached a historical record, since the onset of direct observations. The glacier data that have been collected by the World Glacier Monitoring Service clearly show that glacier melt is a global phenomenon, and will continue even without further climate change. According to these data, the current rate of glacier melt is without precedence at global scale, at least for the time period observed and probably also for recorded history, as indicated also in reconstructions from written and illustrated documents. This impressive dataset of global glacier changes has been compiled over 120 years, together with National Correspondents in more than 30 countries and thanks to labour-intensive fieldwork, sometimes in harsh conditions, of thousands of Principal Investigators that measured “their” glaciers.

A new study has investigated the effect of mineral dust on the surface of Djankuat glacier, Caucasus. It was found that particles have been transported over thousands of miles, e.g. from the Sahara, until deposited on the glacier. Using ground-based and satellite measurements, Maria Shahgedanova and her team showed in their presentation that desert dust is present on 50-70% of the snow-covered area in the Caucasus Mountains, which highly affects melting due to at-surface radiative forcing. Such investigations could now, thanks to satellite data, extend to other regions, e.g. Central Asia, where another talk by Christiane Maier and colleagues focused on the use of isotopic composition of water in the River Gunt in Tajikistan to establish the sources of water, e.g. precipitation, ground water or melt water.

From discussions at the conference, it is clear there is a lack of mountain specific data and information at global, regional, national and local levels, which hampers the generation of mountain-relevant knowledge and impedes advocacy work. However, glacier studies gave good examples about how to contribute to a better monitoring of mountains, and of the rapid changes that are going on there.