Scenarios: The Swiss landscape in 100 years 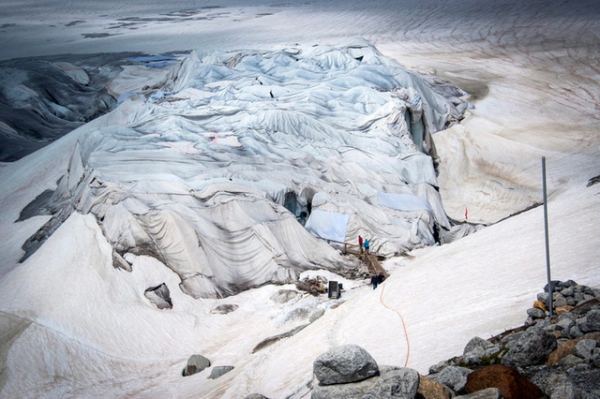 Top scientists predict no more glaciers, more frequent rockslides and browner landscapes. They envision hotter summers, fewer ski areas and more thunderstorms on the horizon. Those projections are based on the work of a Nobel Prize-winning group of climate scientists who keep track of global warming.

“In the mountains and higher elevations, you will have just rocks and debris,” she told swissinfo.ch. “It will be a different world.”

Switzerland's annual mean air temperature has increased by 1.75 degrees Celcius over the past 150 years and "is projected to rise even faster until the end of the 21st century, depending on the emission scenario, accompanied by changes in other variables such as precipitation, snow cover, and run-off", says a 2014 study led by scientists at the University of Bern.

The Swiss cabinet approved the Paris agreement on climate at its March 23 meeting, formally establishing the broad outlines of Switzerland’s domestic and international climate policy until 2030. Environment Minister Doris Leuthard signed the agreement on April 22 in New York and said that the country plans to ratify it by the end of 2017.

Once parliament ratifies it, Switzerland can confirm to the United Nations Secretariat on Climate Change that it is committed to reducing 2030 emissions by 50% from 1990 levels.

To accomplish that, Switzerland must revise its CO2 Act. The cabinet decided that three-fifths of the reductions must be domestic measures, and the other two-fifths can be from offsets taken abroad.

Despite being landlocked, Switzerland owes much of its climate to the Atlantic Ocean's cooling effect in summer and warming effect in winter, according to the Federal Office of Meteorology and Climatology, or MeteoSwiss.

Riklin’s panel is preparing a report this year to update government assumptions about climate change. Those assumptions flow from conclusions of the United Nations-affiliated Intergovernmental Panel on Climate Change (IPCC), which comprises 195 nations and thousands of climate scientists. Previous Swiss reports, issued between 2007 and 2014, paint an increasingly clear picture.

For Switzerland, scientists already foresee irreversible changes in species. Plants and animals that thrive in cool conditions must move higher. For example, a study involvingthe leading climate research group in French-speaking Switzerland found greater vulnerability to climate change among Swiss breeding birds in alpine habitats such as the Citril Finch and White-winged Snow finch. Temperatures will rise in all regions and seasons. More of the country will come to resemble the palm tree-lined lakes and Mediterranean climate of the southern Swiss canton of Italian-speaking Ticino.

Researchers from the Swiss federal technology institute ETH Zurich, for example, have shown that alpine plants could face not only warmer temperatures but also deadly competition from unfamiliar species. A study in September published in the journal Nature found that four Swiss alpine plants – the spring pasqueflower, glossy scabious, alpine kidney vetch and black plantain – were able to cope with warmer temperatures when they were transplanted to an altitude 600 metres below their native habitat but their survival rate dropped in half when encountering unfamiliar competitors.

Higher temperatures will bring more productivity and potential crop yield in farmland and forests; livestock farming also stands to profit. Water availability, however, will become even more important than it is today. There also stands to be an uptick in weeds, insects and damaging weather like thunderstorms, heat waves and droughts. There is a tipping point if temperatures go too high.

Insurance and reinsurance premiums will rise, making it necessary to cut risks through more prevention and planning and different types of construction standards. According to global reinsurer Swiss Re, unmitigated climate change could cost the world economy around 20% of global GDP by the end of this century. Alpine regions that depend on winter tourism will come under particular pressure, though ski resorts – and the second-home market – at higher elevations might benefit.

Mountain railways will have to contend with increased risk from rockslides and melting permafrost, which endanger the foundations of pylons and stations frequently anchored in frozen, loose stone. More tourists likely will be drawn to lakes and mountains to cool off in summer, but not enough to compensate for loss of rail and hotel income in winter. Just getting to the Alps will be harder, as traffic routes deal with more threats like extreme weather.

Switzerland’s substantial water reserves will decline, with more use of lakes and reservoirs producing unknown ecological consequences, though other Swiss computer modelling has shown the water supplies could be assured.

“You will have probably more rainfall in wintertime, and then you will have less water during the summer because if you don’t have any more glaciers, there will be no more glacier water… It will be much more irregular,” Riklin said.

Among the biggest worries for her are the meteorological disturbances. “I think it’s much more dangerous, all the thunderstorms, than the (changed) landscape,” Riklin added. “That’s the big risk.”

The Paris agreement from last year aims to restrict global warming to below 2 degrees Celsius (3.6 degrees Fahrenheit). Most of the responsibility lies beyond Swiss borders.

Switzerland is responsible for just 0.1% of global greenhouse gas emissions, and this share is diminishing with the growth of China, India, Brazil and other emerging economies.