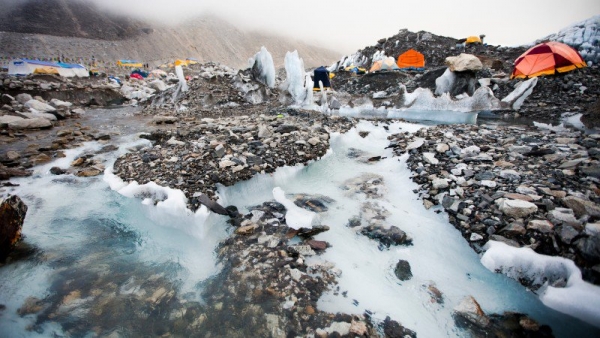 As  a colorful circus of tents pops up at Everest Base Camp this spring, a pair of Ph.D. students will set up camp 1,000 feet downvalley, on the Khumbu Glacier, resuming a research project they started last year. Their goal: to determine just how quickly the world’s highest glacier is melting.

From the Alps to the Andes, ice at high elevations is disappearing rapidly. On Everest, the effects of a warming planet are likely to manifest in two ways that affect climbers. First, the Khumbu Glacier will shrink, and parts of it could possibly become impassable for climbers. Someday, even Base Camp may have to be moved from its current location on the glacier to another spot nearby.

Second, the Khumbu Icefall between Base Camp and Camp I may see a higher frequency of rock and ice avalanches—like the one that killed 16 Sherpas in 2014. The Icefall naturally migrates downhill between three and four feet per day, but that could accelerate as temperatures rise. Earth’s average surface temperature has gone up by more than 1.5 degrees since the late 1800s, and two-thirds of that warming has taken place since 1975

“It doesn’t take a rocket scientist to work out that if you increase the temperature where ice is normally frozen to the bedrock, the hold is going to be weakened and become increasingly unstable and the ice is more likely to detach from the bedrock,” says Duncan Quincey, professor of geomorphology at the University of Leeds, in the UK. He is supervising the research of Owen King and Scott Watson, the Ph.D. students who will spend a few weeks on the glacier this spring. “In places like the Icefall we’ve seen these tragic accidents, and I think it’s fair to say it’s symptomatic of high-elevation warming.”

It's not just unstable ice that poses a risk—the meltwater is concerning, too. Meltwater naturally pools on the surface of both the Khumbu Glacier, on Everest’s south side, and the Rongbuk Glacier on the north side during the warmer months, then drains and reforms as the seasons change. The issue now is that the ponds don’t disappear, but instead coalesce into small lakes. An upcoming paper co-authored by Watson, Quincey, and two other supervisors shows that the ponds on the lower part of the Khumbu Glacier increased in size by 84 percent from 2009 to 2015.

The size and depth of the lakes on the Khumbu Glacier vary. Some are several hundred feet long and others are deep and wide enough to merit the use of boats. King and Watson will use an inflatable kayak to deploy temperature sensors into the ponds. (In fact, they will set the record for highest altitude kayaking. They’ve already been in touch with Guinness World Records.)

“Across the Eastern area of the Himalaya there are more and more [lakes] developing,” says Quincey. “It’s a positive feedback cycle: a small pond absorbs more radiation than it would if it was rock, and that heats the water, which melts more ice, and the pond gets bigger.”

At some point, the side of one of the lakes on the Khumbu Glacier may give way, sending water and debris cascading down into villages in the Khumbu Valley below. The researchers aren’t predicting such an outburst any time soon, but it’s still a concern, Quincey says. "While the last thing I want to do is start saying there's imminent disaster, you really don't want a big lake there at the head of that valley.”

Such a burst has happened before. In 1985, Dig Tsho, a glacial lake in Sagarmatha National Park burst through the moraine dam holding it back, destroying a new hydropower station, 30 houses, and 14 bridges in the Khumbu Valley. Imja Tsho, a large glacial lake in the Everest region, is located just above the Chukhung Valley, which has a number of villages that cater to trekkers, like Dingboche, and has been widely recognized for its potential to flood the valley below, the researchers say.

King and Watson spent six weeks on the Khumbu Glacier last fall, and when they return in May they’ll again deploy their temperature sensors and take photos to inform their 3D elevation model of ice cliffs around the glacier. They’re also using satellite imagery to measure the size of the ponds and building a robot to measure volume. Their results will help shed light on how all debris-covered glaciers in the central Himalaya responding to the temperature change in a similar way.

“I walked every piece of that valley last fall, which took the better part of a month,” King says. “In May, we’ll resurvey the same area, which will show us what’s been going on with the surface. It’s alarming how fast it changes.”