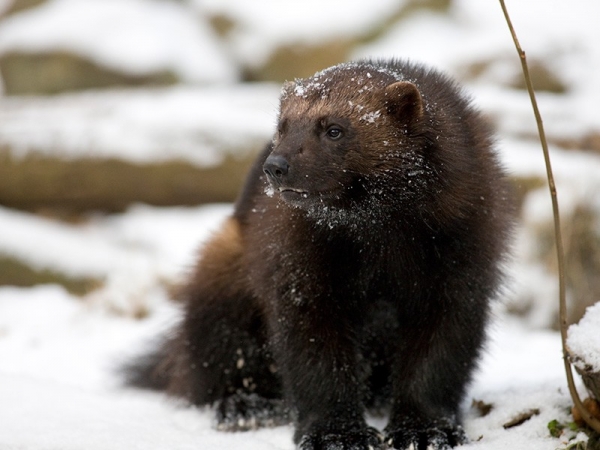 In late winter, when the high mountains of Wyoming, Montana and Idaho are buried in snow, female wolverines in hidden dens give birth to one or two pure white kits. Scientists suspect the snow helps insulate the kits and protect them from predators like wolves, which might explain why mama wolverines often choose north-facing slopes where snowpack lasts longer. Later, when the kits are weaned, the lingering snow serves as a refrigerator: wolverines sometimes cache meat in snowbanks so they don’t have to stray far from the safety of their dens to hunt or scavenge.

Though wolverines’ dependence on snow isn’t fully understood, researchers in 2010 concluded that the animals only reproduce where there’s deep, long-lasting snow. The following year, scientists found that habitat with that kind of snow cover is expected to shrink by 31 percent in the next three decades. So in 2013, the U.S. Fish and Wildlife Service proposed adding the 300 or so wolverines in the Northern Rockies to the endangered species list. They would’ve been the first species in the Lower 48 declared legally endangered because of climate change.

But then regional director Noreen Walsh abruptly changed course. Fish and Wildlife director Dan Ashe backed up her decision not to list wolverines, citing too many uncertainties in the scientific literature. So some 20 environmental groups, including the Western Environmental Law Center, sued.

Now, a federal court has ruled in their favor. On April 4, U.S. District Judge Dana Christensen declared that Fish and Wildlife’s refusal to list wolverines as threatened or endangered was “arbitrary and capricious,” and is forcing the agency to reassess. That means that the elusive, ferocious Gulo gulo is once again poised to become the first animal in the contiguous states to receive federal protections because of climate change.

The decision is significant, says Western Environmental Law Center staff attorney Matthew Bishop, because it suggests that climate change’s impact doesn’t have to be cut-and-dry to prompt protection. When polar bears became the first species thrust onto the endangered species list because of a warming planet in 2008, there was an obvious smoking gun — bears drowning and dying from starvation because thin sea ice limited their ability to hunt seals.

Wolverine researchers may never be able to produce that kind of clear evidence — the animals are notoriously reclusive and hard to study, and the effects of diminished snowpack will probably be less dramatic. Plus, since scientists don’t agree on exactly why wolverines require snow for reproduction, predicting the precise impact of its loss is difficult. But Christensen says this doesn’t matter. “If ever there was a species for which conservation depends on foregoing absolute certainty, it is the wolverine,” he wrote in his 85-page order.

The decision could open the door to listing for other animals that are predicted to be impacted by climate change but aren’t yet experiencing its effects. Pikas, for instance. Corals. Bishop thinks there are hundreds of candidates. As for wolverines, he believes the decision will lead to a threatened listing, though the timeframe is still unclear. (Threatened species aren't yet endangered but are likely to become so. They still receive protections under the Endangered Species Act.)

But given that the Endangered Species Act can’t limit global greenhouse gas emissions, how can it protect the wolverine from climate change?

One solution could be to reintroduce the animal to places where it’s been extirpated, like the Sierra Nevada or Colorado Rockies. Parts of those high-altitude mountain ranges are expected to be spared the worst effects of a warming planet, so restoring wolverine populations there could help the species as a whole survive. Such reintroductions were part of Fish and Wildlife’s 2013 proposal, and could well be part of a future recovery plan. Other solutions include limiting trapping, snowmobiling and other winter recreation in denning habitat.

But Wyoming, Montana and Idaho oppose listing the wolverine for precisely those reasons. Like many Western states, they see an ESA listing — even for an animal that lives mostly above 8,000 feet — as detrimental to economic development.

Yet by law, endangered species decisions are supposed to be about science, not politics or economics. Christensen suspects politics prompted Noreen Walsh’s perplexing 180-degree reversal. “Why did the Service make the decision [to not list the wolverine]?” he asked. “Based on the record, the Court suspects that a possible answer to this question can be found in the immense political pressure that was brought to bear on this issue, particularly by a handful of Western states.”

Bishop has been working in endangered species law for 17 years, and agrees that political influence has increasingly overshadowed science of late. Other animals, like Sonoran desert tortoises have been denied protection despite scientific evidence suggesting it’s warranted. Bishop can only guess politics are at play — which is why he thinks Christensen’s decision was a win for not just wolverines, but for other species living on the brink, too.