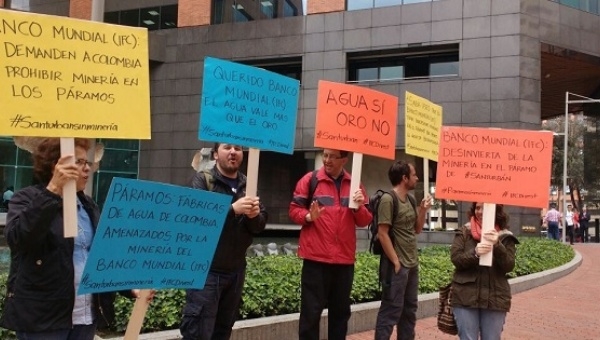 The World Bank invests in corporations that extort Colombian water supplies of Colombians for millions.

Protesters gathered Wednesday simultaneously in Washington D.C. and Bogota, Colombia outside the International Finance Corporation, the private lending arm of the World Bank against the shares it holds in Canadian mining company Eco Oro Minerals Corp.

The company’s sole asset is a mining concession in one of Colombia’s high altitude wetlands, known as the paramos, which provides fresh water for millions of Colombians, explained the organization Center for International Environmental Law in a statement. When Colombia’s highest court ruled that mining in the paramos was illegal, Eco Oro announced it would sue the country using investor-state dispute settlement.

Protesters demonstrated on the eve of Thursday’s shareholders' vote, in which the company seeks funding for its investor-state arbitration against Colombia.

“By continuing to invest in Eco Oro, the IFC is funding a lawsuit that seeks to undermine Colombia’s sovereign right to protect water and regulate in the public interest,” said Carla Garcia Zendejas of the CIEL. “How can this possibly align with its mission to fight poverty?”

This is only the latest of many actions in opposition to the mine and IFC’s investment. Tens of thousands have taken to the streets in Colombia, and just last week, representatives from the Committee for the Defense of Water and the Santurban Paramo, AIDA, and CIEL handed a petition to the IFC signed by thousands of people calling for the IFC to divest.

The paramos are crucial for the generation and conservation of potable water for Colombian citizens. The network of Paramos that runs through the Colombian Andes provides water for over 70 percent of the population. The paramos are also a major carbon sink and one of the most important ecosystems to combat climate change. If this project were allowed to go forward, almost three million people could be impacted by Eco Oro’s mining activity in the Santurban Paramo.

“The paramos have been called the lungs of the earth,” said Alix Mancilla, an active participant in the committee in Santurban, a diverse civic coalition composed of 40 groups that oppose the mining project. “To operate the mine, the company would use huge amounts of cyanide and explosives. We cannot have mining and protect our water supply at the same time. We say no to gold, yes to water.”

In August 2016, the IFC’s compliance office found the project hadn’t met the IFC’s own performance standards. Eco Oro’s shares have been falling steadily and earlier this year the company announced its intention to sue the government of Colombia.

“At this point, the IFC is invested in a company whose value rests on winning litigation against Colombia, litigation that will likely cost millions in tax dollars. The IFC should not be betting against Colombia’s efforts to enforce its laws and protect its water,” added Garcia.