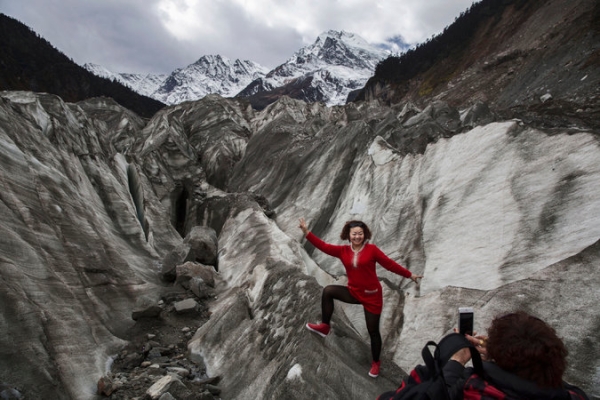 Glaciologists in China and elsewhere have said for years that climate change is the main cause of glacier erosion, which threatens the water sources of much of humanity.

Officials in the far northwestern Chinese region of Xinjiang now say another factor is putting the fragile glaciers at risk: tourism.

The Xinjiang government announced this month that it was banning tourism on glaciers across the region, which is one-sixth of the Chinese land mass. Many glaciers are found in Xinjiang, and in the Tianshan range in particular, which runs east-west through the middle of the vast region.

Officials want to ensure that tourists observe the glaciers from a distance, not atop the glaciers themselves, according to a report published on Thursday by Xinhua, the state news agency.

The report said that, over the last 50 years, the average temperature in Xinjiang had risen 0.33 to 0.39 degrees Celsius a decade, or about 0.6 to 0.7 degrees Fahrenheit, nearly three times the global average. China has 46,377 glaciers, and about 47 percent of the national ice reserves are in Xinjiang, a rugged region of deserts, forests and soaring mountains that shares borders with more than half a dozen countries.

The report said that “global warming, grazing, mining and tourism have accelerated destruction of the glaciers, and led to water shortages in several areas.”

It quoted Chen Xi of the Chinese Academy of Sciences as saying that glaciers in the Tianshan range have receded 15 to 30 percent in the last three decades.

Scientists say the main cause of climate change is greenhouse gas emissions, mostly from industrial coal use. China emits more greenhouse gases — carbon dioxide being the primary one — than any other country. The United States is second in emissions.

The growth in China’s coal use has slowed as the national economy cools, but climate researchers here expect emissions to continue rising until sometime between 2025 and 2030.

Glaciologists have observed glaciers in retreat across western China. In Gansu Province, the Mengke Glacier, the largest valley glacier in the Qilian range, and two others have been retreating at an accelerating rate since the 1990s, according to a report by a local research center. That rate tripled from the 1990s to the 2000s, the report said. That has resulted in floods in recent years. In the long term, it said, there will be water shortages across the region.

Provincial and regional governments outside Xinjiang have not announced bans on glacier tourism. In Gansu, such tourism in the Qilian range is popular. The July 1st Glacier, about 55 miles southwest of Jiayuguan, site of the western end of the Great Wall, draws many people each year. In Sichuan Province, tourists flock to Hailuogou National Glacier Forest Park, and Yunnan Province has the popular Mingyong Glacier.

Officials in Urumqi, the capital of Xinjiang, banned tourism to No. 1 Glacier near the city in 2006. But in recent years, tourists have gotten rides to the glacier with local herders looking to make money. A Xinhua reporter who visited the glacier in July described seeing tourists there taking photos and littering.

The Xinhua article from Thursday quoted Li Jidong, a Xinjiang tourism official, saying that glacier tourism in the region brought in less than one billion renminbi, or $153 million, over the last dozen years.

“The loss from shrinking glaciers,” Mr. Li said, “is incalculable.”