After decades of worsening drought in arid mountains, China relocates more than 350,000 people 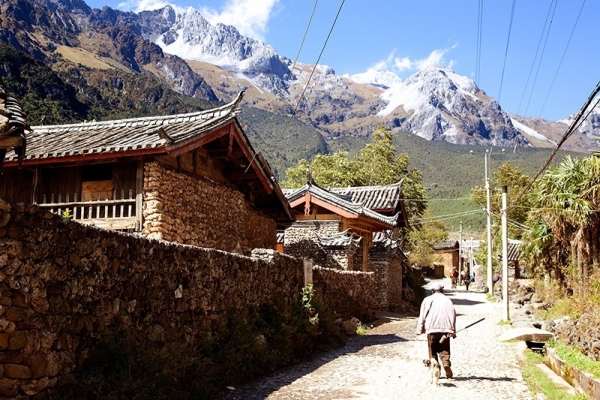 Village elder Yang Zhenjun isn't ready to move out from the valley where his people have herded sheep and tended crops for generations amid arid, drought-prone mountains of China's northwest. Still, he acknowledges that life as he has known it is all but over.

The community's 60 families have dwindled down to 11 in recent years. Others have left this area, which is almost completely dependent on often-scarce rainfall, and have headed north to plains with better infrastructure and more accessible water.

"The village has completely died," says Yang Zhenjun, a fifth-generation resident of Dacha village in Ningxia province's Xiji County. Still, he is not eager to move. "I was born in this village. I grew up in this village. Everyone struggles with these same feelings."

Most former residents of Dacha have moved under a government plan to relocate 350,000 people to lift them out of grinding poverty which, for their region, has been worsened by an increase in average temperatures of 2.2 degrees Celsius (4 degrees Fahrenheit) over the past half-century that leaves the land more parched.

The U.N. refugee agency says that people being displaced because of climate-related reasons are a growing global problem. It's pushing for greater awareness of their plight during a climate change conference in Paris opening Nov. 30. The UNHCR says long-term planning can help minimize such displacement in the future.

Many of Dacha's houses are empty and overgrown with plants and trees; walls and roofs have crumbled. As people leave, schools and other facilities in villages like Dacha are forced to shutter, making life tougher for those left behind.

On the other hand, some of the parched land can recover now that fewer people are using its scarce water.

"Resettlement and climate change are becoming more closely entwined," said Sarah Rogers, an Australian geographer who has studied the effects of climate change on China, adding that the Chinese government has identified resettlement as a way to adapt.

There are about 60 million people worldwide living in what the UNHCR terms "climate change hotspots," and China is one of the worst affected, agency spokesman Andreas Needham said in Geneva.

The UNHCR says an average of 26.4 million people have been displaced by natural disasters every year since 2008. Of the 19.3 million thought to be displaced last year, more than 85 percent were in Asia, including 5 million in the Philippines and 3 million each in China and India.

Many who have moved in Ningxia are for the most part content with the result.

Hai Yanhu, 71, who moved in July 2012 from Panwan village in Xiji County to a resettlement project in Pingluo County in the north, said he is happy to now have running water and a shower. He barely thinks anymore of his old village, where going long distances to fetch water was a daily task.

"We would have to go down into the valley, and carry the water with a pail on our backs. We would go every day, but if there was something special happening at home then we would have to go four or five times a day," Hai said.

Not all the moves were voluntary. Wang Ziyi, 52, said he moved to Pingluo in December 2014 from Huoshizhai in Xiji County because the government claimed the village's land to plant forests to make a tourist site.

Some families tried to live in tents on the outskirts of the old community, Wang said. "But it's cold. If you tried to put up a house the government wouldn't let you build it, so there was no choice but to leave."

Wang said he misses his old town but that the "economy here is better than the economy in the mountains of Xiji. It's more convenient. Here, it's a bit easier to find manual labor jobs."

The government is proud of the relocations. Zou Yuzhong, deputy director of Ningxia Poverty Reduction Bureau, says the government is moving people out of "inhospitable" climates to "help put them on the path to success."

He dismissed any claims that some are unhappy about leaving their ancestral homes.

"They are incredibly happy and absolutely are in favor of the government implementing these livelihood projects," he says.

Some migrants, however, struggle to adapt, said Wang Yuxiao, head of the Yinchuan Green Sustainability Development Centre, a nongovernmental agency.

"There are many old people who do not want to leave their old homes," Wang said. "Another problem the migrants are facing is the problem of finding work once they've moved to their new homes."

Ma Bingfu, 52, who moved to Pingluo from Taobao Village in Xiji County in October 2011, said the young adjust better than older people.

"This area that we're living in now? There's water and the roads are good, and young people are fine here. But old people don't like it. We can't find work. We have no land to grow on and we can't find work."

"Lots of old people want to go back," he said. "In our old villages we had land we could work. Here we have nothing."