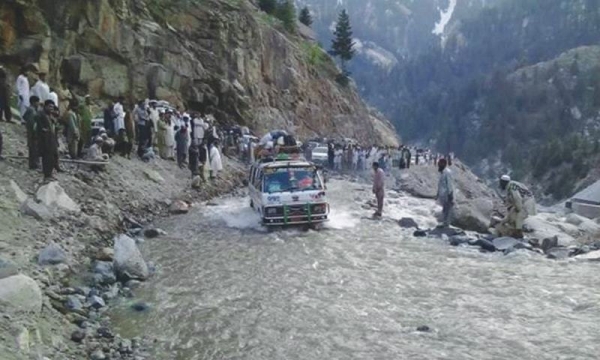 According to Pakistan’s National Disaster Management Authority (NDMA), the recent torrential rains and flooding in the country’s north have killed over 200 people in Khyber Pakhtunkhwa (KP) and Gilgit-Baltistan. These mountainous parts of the country have numerous roads blocked due to landslides and many houses destroyed. There have been two major rain spells in the region in less than one month, and some experts have attributed the extreme weather patterns to climate change.

“Although it is normally difficult to link a single climatic event to climate change, the erratic rainfall occurring in Pakistan these days can easily be linked to climate change; we can expect more erratic weather events in the future,” says Qamar-uz-Zaman Chaudhry, vice president, World Meteorological Organisation.

Other experts say that because of heavy deforestation in the mountainous north, the rains are now taking their toll, with landslides and the rapid erosion of mountainsides. According to Malik Amin Aslam, the vice president of the International Union for the Conservation of Nature, “While climate change is causing enhanced intensity of rainfall, unfortunately deforestation is abetting the mass scale damage”. Malik Amin is also an advisor to the KP government, which has launched the “Green Growth Initiative” to reverse the trend of deforestation that, Malik Amin points, out has been going on for decades. The KP government is currently undertaking a large-scale reforestation project called ‘The Billion Tree Tsunami’ to plant millions of trees and protect existing forests. Any project that would increase the existing 2.5pc tree cover in Pakistan, according to WWF Pakistan, is more than welcome.

In a copy cat move, the federal government has also recently announced the ‘Green Pakistan Programme’, to be led by the prime minister which aims to plant 100 million trees all over the country in the next five years. The programme, however, is yet to commence implementation on the ground.

According to Federal Minister of State and Chairperson of the Benazir Income Support Programme (BISP), Marvi Memon, who recently visited the rain damaged areas of Kohistan, the local people cut trees in order to meet their fuel needs which results in deforestation. The deforested mountain slopes then enhance the severity of landsliding and floods. In order to prevent deforestation, she has introduced the making of “bio briquettes” under the ‘Climate Smart Villages’ campaign.

Bio briquettes are an efficient, cheap and environment friendly fuel which is prepared with organic waste. Besides domestic use, the briquettes can also be sold, adding to household incomes. The minister learnt about Bio-Briquetting technology from the International Centre for Integrated Mountain Development (ICIMOD) during her visit to Nepal, and is keen to introduce it to every village in the country under the BISP.

The ICIMOD was created in 1983, and has eight member countries including India, Pakistan, China, Afghanistan, Nepal and Bhutan. There are scientists from all over the region working for ICIMOD, who publish regular reports on the fragile state of our shared mountain ranges, the Hindu Kush / Karakorams / Himalayas. The ICIMOD has successfully introduced bio briquettes, which are now being used widely in Nepal to light cooking stoves and heaters. Beehive Briquetting Technology (BBT) converts unwanted bio-mass (weeds, paper trash, etc) into charcoal in a charring drum. A mould (the only real cost involved) is used to turn it into solid fuel bio briquettes, which can be ignited easily and produce smokeless burning, thanks to the airflow through the various holes in the briquette. One briquette is enough to prepare a meal for a small family. For many villagers in Nepal, making briquettes is a side business.

There are so many other wonderful technologies that the ICIMOD has successfully introduced to the mountainous areas of Nepal which could easily be introduced to Pakistan’s north to help our villagers adapt to climate change. Access to fresh water is a recurring problem in the mountains, worsening due to climate change, yet the ICIMOD has perfected rooftop rainwater harvesting, which entails collecting rainwater that hits your rooftop by channeling it into a large tank, which then stores the water for later use in the house and kitchen garden. This simple but ingenious solution has already been introduced to many households facing water shortages in the Murree area by a local NGO.

The ICIMOD researchers have also introduced what is called Sloping Agricultural Land Technology. This sounds a bit complicated but actually consists of growing different species of trees and plants close together. Dense, double hedgerows of trees or shrub species are planted along contour lines which prevents soil erosion and improves soil fertility. In the long run, this protects mountain communities from landsliding and the flat terraces can be used to grow cereals, vegetables and fruit trees.

Scientists at the ICIMOD have also come up with various methods to improve cooking methods in the mountains — as foraging for fuel wood is a constant problem for villagers, and a cause of deforestation. They have developed solar cookers and improved biogas plants. In fact, they have proven that one can use biogas at heights of up to 3,000 metres with their new Puxin biogas digesters. These digesters use bio mass such as soft grasses and kitchen waste, instead of the usual cow or buffalo dung, and can run at least one stove and a couple of light bulbs. All these tried and tested technologies should be introduced to our mountain farmers by the government, as in the near future, climate change is only going to cause more destruction.