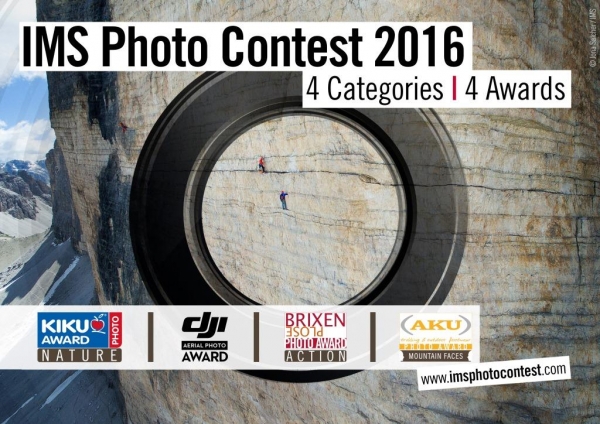 Once again, mountain photographers from all over the world are looking at South Tyrol. In the sixth edition of the IMS, photographers compete for four awards in four categories for a total of over 10,000 Euros.

More than 10,000 photographers from 100 different countries participated in the International Mountain Summit IMS photo contest over the last five years. For the first time, the contest breaks with one of its tradition: this year, there is no central theme. Photographers can submit their photos in four different categories, giving even more space to their creativity.

The category “Mountain Nature”, launched in collaboration with the premium apple label KIKU, collects all those photos that capture the natural beauty of the mountains: from a colourful sunset and torrential mountain streams to the looming snow cornice on a mountain ridge just below the summit. The “Mountain Aerial” award is offered in collaboration with the world leader in drones DJI to provide new perspectives on the world of mountains. All photos taken with drones or multicopters can be submitted for this award. The host town Brixen shows its active and sporty side also through phorography. Launched specifically for the IMS photo contest, the Brixen Photo Award is bestowed on the best outdoor and mountain action shots. Finally, the best pictures submitted in the category "Mountain Faces" will win the AKU Photo Award, sponsored by AKU footwear. Photos in this category tell the stories of people in the mountains as they go about their daily life and work, do sports or experience the mountains in other ways.

„Mountain photography has a lot to offer to South Tyrol and the IMS: it helps us bring together people with a passion for mountains and create a network of mountain enthusiasts", so the organisers of IMS Markus Gaiser and Alex Ploner on the launch of the sixth edition of this international photo contest. The members of the Jury include, among others, award-winning mountain photographer Robert Bösch from Switzerland, known for his works for the outdoor clothing and equipment manufacturer Mammut. The Chair of the Jury Georg Tappeiner has shaped mountain photography in the Dolomites, while Lorenzo Di Nozzi's portaits of shephards in the Valsesia Valley are admired by many.

A special award is waiting for some of this year's participants. Their photos could become part of the next edition of the photo book “Atem der Berge”, a collaboration between IMS and the prestigious publisher Bruckmann from Munich, Germany. In March 2016, the 2015 edition of the photo book won the ITB Book Award 2016 as best illustrated travel book of the year at the Travel Trade Show ITB Berlin. The French edition of the book will be presented in October at the festival.