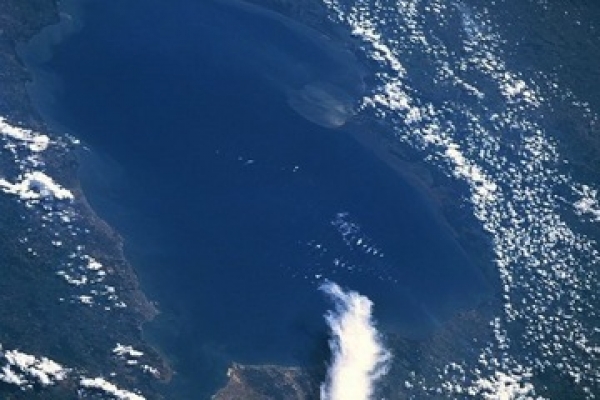 The place most likely to be struck by lightning in the world is one spot above Lake Maracaibo in Venezuela, according to new data.

Over this mountain lake, there was a lightning show an astounding 297 days out of 365 days a year, on average. Even more surprising, the lightning strikes didn't occur just over the massive lake, but at one particular spot — the point where the lake empties into the Catatumbo River, researchers said at the annual meeting of the American Geophysical Union.

Past research had suggested that a town in Rwanda was the most prone to lightning strikes, but that finding was based on satellite data with lower resolution, the researchers said. [Electric Earth: Stunning Images of Lightning]

To get a better picture, Rachel Albrecht and her colleagues used satellite data collected from 1998 and 2013 from NASA's Tropical Rainfall Measuring Mission Lightning Imaging Sensor, which provided resolution down to 0.1 degrees latitude — corresponding to roughly 7 miles (11 kilometers).

"We can see very detailed features," Albrecht, a climatologist at the Universidade de São Paulo in Brazil,, said in her presentation.

Overall, the Mitumba Mountains in the Democratic Republic of the Congo had the most flashes over that period. The mountains in Cameroon in West Africa were also home to many lightning strikes.

However, to determine hotspots, the team focused on lightning-prone regions where at least 1,000 people lived nearby. Based on that data, Las Lagunitas, Venezuela, near Lake Maracaibo, took the top honors. The No. 2 and 3 spots went to Kabare and Kampene in the Democratic Republic of the Congo.

The new hotspot title isn't surprising to researchers: As early as 1598, the poet Lope de Vega described the stunning light show on the Amazon Lake in his poem "La Dragontea." And in the 1800s, ships used the regular flashes as a natural lighthouse to guide ships safely through the lake, Albrecht said.

Africa was the flashiest of the continents; 283 of the most lightning-prone villages, cities or towns were in Africa.

"You can see Africa all covered with hotspots," Albrecht said.

By contrast, people in North America are pretty unlikely to face a lightning strike. Of the top 500 most lightning-prone cities or towns, just 53 were in North America. In addition, those spots were concentrated in the Sierra Madre mountains, along the spine of Mexico, as well as in the Yucatan peninsula and the islands (such as Cuba) in the Caribbean. About 87 of the hotspots were in Asia; the most lightning-prone region was in Pakistan, near the Hindu Kush mountains. (Europe did not make the cut at all.)

The team also found other trends in how lightning struck. During the daytime, the warm breezes pull afternoon showers — and lightning — over the beaches; however, "during the night, the thunderstorms occur over the oceans," Albrecht said.