Uganda:- Government to use drones to enhance food security 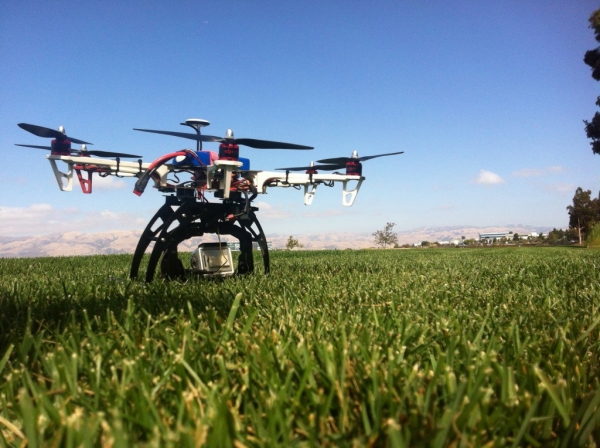 They are more associated with spying, but unmanned aerial vehicles (UAVs or drones), will soon be deployed in Uganda to help farmers increase agricultural output and enhance food security.

A drone is operated using a remote control and flies using propellers. It can be fitted with a knapsack in case the operator is interested in spraying crops.

Opolot cited spraying as one of the activities where drone technology could be used to cover more than two villages in a day. He added that this could help farmers in Teso sub-region where pests have been affecting oranges.

According to the agriculture ministry, Teso is known to have more than five million orange trees and an estimated 1.5 million trees of mangoes.

He pointed out that discussions are taking place within the Government to introduce the technology in the agricultural sector.

“A drone goes for about $6,000 (sh20m) and could be more effective than hand pumps when it comes to dealing with pests affecting oranges,” he said.

However, initiatives outside the Government are moving faster than the Government to work with drone technology in agriculture. Opolot cited Equator — a seed company — that has been spraying using drones in the production of seeds.

Opolot pointed out that a Chinese company investing in seed technology in Uganda will set up a demonstration using drone technology at Kikyusa in Luwero district.

He said the International Potato Centre (CIP) and the UN Food and Agriculture Organisations (FAO) are in advanced stages of making trials on spraying potatoes with the technology in the districts that constitute the former Kigezi region in southwestern Uganda.

Apart from Uganda, Tanzania will benefit from the initiative by the International Potato Centre and FAO. The drone trials will be implemented in partnership with the National Bureau of Statistics.

In September, the International Water Management Institute (IWMI) carried out trials in Sri Lanka using an eBee drone equipped with a near-infrared sensor; the trials showed how this can give farmers early warning of problems anywhere in their fields.

“Using near-infrared, you can identify stress in a plant 10 days before it becomes visible to the eye,” says Salman Siddiqui, the head of IWMI’s GIS remote sensing and data unit.

“A plant is stressed by either water or fertiliser shortage, or because it is being attacked by a pest. Photosynthetic activity decreases and this affects the chlorophyll. That is what the near-infrared sensor can detect, but our human eye cannot see it until it is in more advanced stages.”

That 10-day warning could prevent large-scale crop losses. Siddiqui says: “If a crop is being attacked by insects, the whole area can be affected, not just one farmer. With UAVs, if you can figure this out before it spreads, you can save the whole area.

Accurate data is crucial for effective agricultural policy-making, but a report by the World Bank this year highlighted how patchy that data is for much of sub-Saharan Africa.

“Donors and governments look at statistics, and in some places smallholder plots are so small we do not have precise statistics on their crops,” says Dieudonné Harahagazwe, a senior CIP scientist based in Nairobi.

“With sweet potatoes, for example, policy-makers might say it is not an important crop because there are just small, scattered plots. Or the statistics cannot tell the difference between potato and sweet potato. This is important, because farmers lose out if the statistics are not accurate.”

This was confirmed by CIP’s initial trials using drones to map fields in Uganda. According to its research in the Kumi district of eastern Uganda, official statistics underestimated the planting of sweet potato by a staggering 50%.

Such a disparity between what is in the books and what is in the fields can make a crop less visible to policy-makers, which means smallholders might not gain access to the relevant extension services such as training, seeds or micro-insurance.

With a drone in the sky for half an hour, you can probably say exactly where groups of animals are.

In a separate interview, Edward Opolot, the head of Aijar, a private company, said the drone technology is used in monitoring water stress in crops and that this helps empower farmers to intervene and cut losses.

The drones can provide more accurate, up-to-date information on crops being grown in different places as well as data on crop output in a failed season as well as a bumper harvest.

The drone technology has excited researchers. Opolot said demonstrating how drones might be used in these situations is necessary.