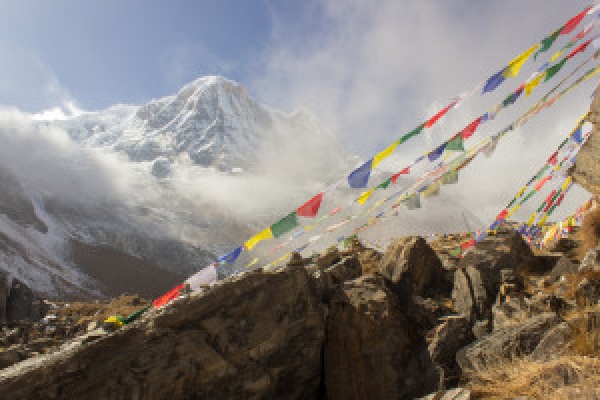 The village of Manang, high in the Himalayas in Nepal, is using economic diversification to stave off the effects of climate change, but will soon reach a point where more adaptation is needed, Katie Konchar and her coauthors warned in a newstudy in the Journal of Ethnobiology. The team used semi-structured interviews and innovative photography techniques to gain insight on current village perceptions and adaptations.

Nearly three-quarters of respondents perceived increased temperatures especially during the winter months – consistent with the regional instrumental observations. The uniquely structured interview style allowed for more detailed responses. For example, one villager stated “[b]efore in winter water was ice; now we can easily wash our face in winter.” The authors argue that the unique ecological knowledge of locals is vital to the development of placed based adaptation plans.
Villagers offered a variety of explanations for climate change: CO2 concentrations, pollution, or development, while others, usually the elders, believed it was due to actions of gods. One of the participants who mentioned CO2 was part of an outreach program by the Annapurna Conservation Area to educate the villagers on the effects of climate change.
The village relies heavily on glacier meltwater for its traditional agriculture economy, since it is in the rain shadow of one of the tallest mountains in the world, Annapurna, so that seasonal rainfall is insufficient for raising crops. This region has seen a change in the predictability of rain, leading to an abnormally varied growing season. Though the increased temperatures and varied rain make it difficult to maintain their traditional agriculture, the participants pointed to an increase in cash crop such as vegetables as one of the most important changes in their livelihoods. The authors state that the transition from traditional crops–chiefly grains and potatoes, adapted to cold climates–to milder climate cash crops is an important step to adapting to climate change. Tourism has also increased ,due to improved transportation in the area which allows foreigners to trek into the area, helping to diversify the economy even further.
The authors point to the diversification as an important adaptation, but they also warn of future dangers in an even warmer climate. Glacier retreat could lead to decreased water availability, less attractive scenery to attract tourists, increased glacial lake flooding and an unreliable traditional agricultural calendar. The authors argue that the traditional practices, reinforced by spiritual lamas, need to adapt alongside the economic changes already being seen.
The interviews in this study were validated in part by a unique technique of repeat photography-pictures taken during the week of interviews were compared to historical pictures to see climatic changes. These “… photographs illustrate the changes in woody vegetation coverage surrounding the village, the increase in the size of Gangapurna Lake [due to increased glacial melt], and the rapid retreat of the Gangapurna Glacier highlighted during interviews.”
Though the authors applaud the villager’s added economic resilience of planting more cash crops and increased focus on tourism, they say there will come a point when the agricultural society will not be able to live off of the glacier meltwater or rain seasons that they traditionally depend on, and need to start adapting at an even quicker pace. “Continued development of relevant, place-based adaptations to rapid Himalayan climate change depends on local peoples’ ability to understand the potential impacts of climate change and to adjust within complex, traditional socio-ecological systems.”
Work regions:
Asia-Pacific
Mountain Ranges:
Central Himalaya (Nepal Himalaya)
Tags:
Adaptation | climate change | economic diversification | global warming | glacier retreat