On a spiritual prowl for the elusive, endangered snow leopard 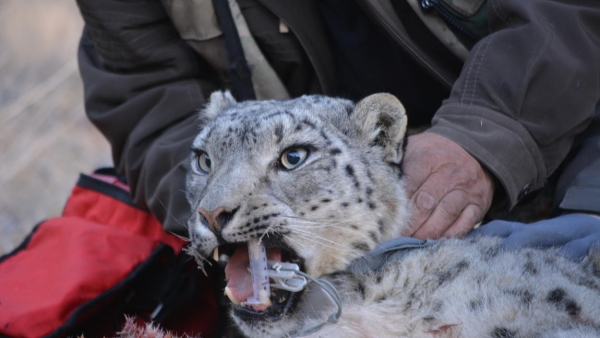 High atop a mountain in Mongolia, a team of trackers splits into three groups to check their traps each morning. Their goal: to catch a snow leopard, one of the most elusive creatures on Earth, so rare that few have seen one of the big cats in the wild.

After failing to catch a leopard during the first week of their expedition, the World Wildlife Fund team members are growing anxious. Over three expeditions to track and collar the big cats since summer, they've caught only one leopard. Are they going to end up empty-handed this time?

But as crew members are slurping down steaming bowls of traditional milk tea, they get their first break. A herdsman who has heard about their expedition calls to say that a leopard has attacked his flock of sheep and goats.

The team members know that leopards typically return to the site of an initial attack to feast after nightfall, so they surround a sheep's carcass with snare traps.

The following morning, they return to the spot at the foot of Jargalant Khairkhan mountain here in Mongolia's Khovd province. The flesh of the sheep has been entirely eaten away, but no traps have been sprung.

They curse their bad luck — and they marvel again at the leopard's skills of evasion.

Known as the "spirit of the mountain" to locals, snow leopards are rarely seen in the wild because of how well their spotted white fur blends in with their surroundings. Not quite white as snow, as the name might suggest, their fur is still striking — especially in contrast with the crystal-blue eyes found on some.

The big cats are increasingly threatened as developing Mongolia rapidly expands its economy. With just 3 million people in a country about the size of Alaska, Mongolia is the least densely populated nation. Still, the migration routes of wildlife have been cut off as the country lays down more and more pavement for roads and track for rail, and as developments such as mining projects encroach on age-old habitats.

For the snow leopards at Jargalant, and the rest of Mongolia, the biggest threat is encroachment by the country's tens of thousands of herders. An explosion in the number of horses, cattle, sheep and goats has set off a war between nomads and wildlife. To herders, snow leopard attacks on their animals are common and can cost them thousands of dollars.

Of the 4,000 to 6,500 snow leopards the World Wildlife Fund believes remain in the wild, 800 to 1,000 are here in Mongolia. They're listed as endangered in the International Union for Conservation of Nature's Red List of Threatened Species.

Mongolia's WWF team has a mission: to protect their range.

Soronzobold was 13 when he caught a glimpse of his first "spotted brother." The snow leopard slunk past a boulder while the teen was tending to his family's livestock in the wilds of western Mongolia.

"It lasted about two minutes, but I've thought about it my whole life," he says.

Soronzobold, who like many Mongolian nomads goes by a single name, remembered his grandmother's advice: Don't try to hurt the elusive feline, even though it poses a mortal threat to the herd. Not that he would have been able to anyway, being so mesmerized by the agile and graceful movements of the big cat.

In the more than two decades since, Soronzobold has encountered endangered snow leopards often enough to hear and see things in the wild that few experts have observed. Now, he's on a mission to protect the animals, putting his specialized knowledge to use for the WWF to monitor the 37 snow leopards it believes inhabit Jargalant mountain.

In November, he welcomed seven WWF staff members into his traditional felt dwelling, known as a ger, transforming the round tent into a base camp for wildlife specialists. It was a bit crowded in the windowless white structure, but the extra bodies kept it toasty while temperatures outside dipped to minus-5 degrees.

The specialists knew they would have to summon all of their patience, and hope for some extraordinary luck.

"It depends on our team and also nature," said Dalannast Munkhnast, a species specialist. "I would say it's a 50-50 chance."

After the trap with the sheep's carcass fails to snare the snow leopard, the team is gloomy. Then, suddenly, dejection turns to elation.

He's reviewing images captured by a motion-sensing camera aimed at the traps, and recognizes the tracking collar he helped put on a big cat in 2013 — the group's first such successful collaring in Mongolia.

They named her Tengri, derived from the word tenger, or "sky," which many Mongols worship. Munkhtogtokh said she was given a divine name to reflect the importance of their first catch.

For nine months, the collar had transmitted valuable data via satellite about Tengri's daily habits and the boundaries of her habitat. But suddenly, in 2014, the device stopped functioning. From that time on, Tengri's trackers had no idea whether she was still wearing it — or was even alive.

Buoyed but anxious, the team regroups. "It's very important that we catch Tengri," says Munkhtogtokh, one of Mongolia's foremost experts on the snow leopard.

"If the collar falls off today, we might never find it," he says. And the data would be lost forever.

For centuries in wintertime, Mongolian herders have moved farther up Jargalant, where the leopards roam, to rotate their pastures just as American farmers do to avoid exhausting the land.

The difference today is the massive size of herds and the worsening quality of the land. According to government statistics, 70% of the territory used for pasture is degrading or has already become barren.

"We have predators; wolves and snow leopards are the most worrisome," says Bolor-Erdene, a 23-year-old herder in the area where the WWF team has camped. "Those animals aren't scared of people at all.

Soronzobold's ger sits on a wide plain surrounded by light vegetation. It snows only a few times a year here, making it an ideal spot for livestock to graze in winter.

A day after Tengri narrowly got away, species specialist Munkhnast delivers the news that a leopard has been ensnared. The team hikes to a spot more than 7,500 feet above sea level. An adult leopard waits uneasily.

Munkhtogtokh soundlessly loads a sedative dart into his air gun and aims carefully. After the shot, the leopard makes a violent start, as if stung by a hornet, but quickly regains its composure. Within 30 minutes, though, it's asleep, and the team can approach.

"It's a 4-year-old male," Soronzobold says after collaring the leopard and making his inspection. "It's one of Tengri's cubs; I'm certain of it."

The World Wildlife Fund plays on traditional superstitions to boost its conservation efforts.

Snow leopards are revered, feared and even hated by nomads. Mongolians have a strong dislike for cats in general, and many recite well-known proverbs such as, "If you feed a cat, they'll eat you next," or "Cats are always watching you, waiting for you to die."

But the leopards carry a mystique: Locals say that anyone foolish enough to hurt or kill a snow leopard will suffer from the "black footprint" curse — meaning a dark spot is imprinted on the soul, giving the victim and his family great misfortune.

By reinforcing such beliefs, the conservation group hopes herders will be less willing to hunt the cats. They've even sponsored production of a film that depicts a terrible end for a herder who set traps for a snow leopard that picked off animals in his herd.

Although the team is in high spirits after tagging the young male, the knowledge that Tengri is still out there, with two years' worth of information around her neck, nags at their thoughts.

She continues to taunt them in the following days, repeatedly killing livestock near the site of her first attack. But she seems to have the cleverness of the Roadrunner, sneaking past the traps — sometimes setting off a device without getting caught.

At last, the team decides it's time for a new approach. Soronzobold and the WWF group set down a set of smaller snares that are more easily hidden.

On the last day of the expedition, the new approach pays off, and Tengri is caught.

When the team arrives at the location some miles away from the first kill, Tengri is alert, though less nervous than the male trapped two days earlier (by now he has been named Black Gorge by the team, after the area where he was caught).

Again, out comes the air gun. Pop! A shot to the hide. Tengri seems to take it almost in stride. The team removes the old collar and replaces it with a smaller, lighter device.

When she awakens about an hour later, she immediately pulls herself up, even though she is still weighed down by the sedatives in her body. It takes only a sideways glance or nod before losing sight of her as she disappears into the dusty crag.