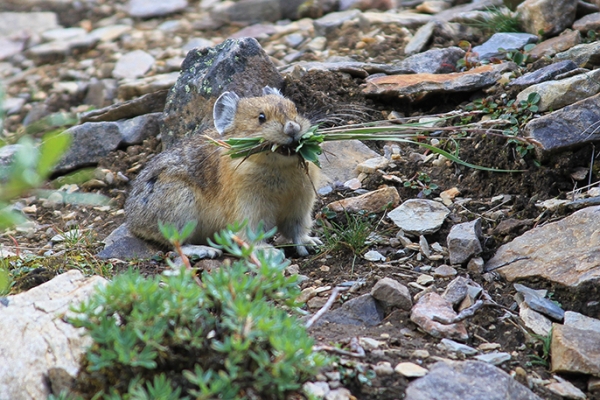 Scientists from the United States National Park Service (NPS) and three American universities predict a complex future for populations of the diminutive and charismatic pika. The hamster-sized member of the rabbit family lives in rocky, icy patches in the western United States.

Funded principally by the NPS Climate Change Response Program, researchers from the NPS, Oregon State University, University of Colorado Boulder and University of Idaho completed a five-year study on pika populations' vulnerability to climate change in eight national parks. The predictions through the end of this century vary by park because of local conditions such as elevation, weather patterns and genetic diversity.
For example, in cold and wet Grand Teton National Park in Wyoming, scientists expect pika populations to survive. However, the researchers predict local extinctions of the species by the year 2100 in other parks, including Rocky Mountain National Park in Colorado. Study findings will help guide park strategies to mitigate the effects of climate change.
"Because of this study, we can see that other factors, like habitat connectivity and gene flow, can influence the extent that climate change disrupts an ecosystem," said Tom Rodhouse, an NPS ecologist and third author of the paper published today in the peer-reviewed journal Global Change Biology. "This knowledge can be used to develop management and conservation practices for the coming decades."
The elusive creatures are a favorite of sightseers in high-elevation stretches of Rocky Mountain's famous Trail Ridge Road, where pikas inhabit cold pockets in boulder fields and emit "barks" the sound of squeaky toys.
But beyond the cuteness factor, the pika is an important indicator of the overall health of mountain ecosystems. As climates change, higher areas in some parks may warm to the point that pika populations can no longer survive in them.
"In general, the availability of pikas' preferred habitat –cold, high-altitude boulder fields –will decrease as temperatures rise in the coming decades," said Donelle Schwalm, researcher at Oregon State University and lead author of the paper. "But even as we predict extinction of pikas in some parks, other areas will continue to provide adequate shelter for pikas to live and potentially thrive."
Schwalm, Rodhouse and colleagues performed this research on pika populations as part of the service's Inventory and Monitoring Program, which collects, organizes and synthesizes natural resource data. Beginning in 2010, the researchers used field surveys, genetic analyses, geographic information and climate change forecasting in all eight parks to identify key risk factors that could threaten pikas' survival.
Each park in the study has unique conditions, so persistence of pika populations by the end of the century will vary from park to park. Here are brief outlooks for the eight parks in the study:
The paper, Habitat Availability and Gene Flow Influence Diverging Local Population Trajectories Under Scenarios of Climate Change: A Place-Based Approach, can be found here.
More information about the Pikas in Peril project, including detailed results for each park, is available on the study website here. For more information about this and other studies being conducted by the NPS Inventory and Monitoring Program, visit http://science.nature.nps.gov/im/ or contact Tom Rodhouse by email.
Work regions:
North America
Mountain Ranges:
-- North America in general --
Tags:
biodiversity | USA | mountains | pika | mammals | climate change